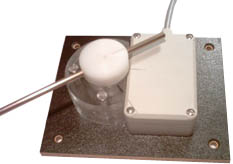 The submersible encoder returns the angle shaft (axe) position over the full 360° range without any stop.

There is no electrical connection or mechanical link between the moving shaft and the interface. The interface enclosure is waterproof (IP65) and to make it better and also resistant for pressure, it can be filled with epoxy resine after the connections are made.

A special chosen magnet is mounted in the middel of the turnning shaft and a poulie or axe can be mechanically fitted to it. So the interface measures the angular position of the shaft magnetic field with Hall sensors. After calculation, the interface microcontroler will output the angle in RS232 and 485 (0-359°) format (blue) or RS232 and 4-20mA (green on the diagram), this depending on the chosen type.

This encoder is very suitable for level measure in underground water chanel (see drawing). The first applications were the measure of the dirty drain sludge where other type of level sensors such as ultrasonic/capacitive or optical do not qualify because of the floating dirt. In such topic, the level infos are generally transmitted in 4-20mA mode to a frequency converter that drives a power pump (see the green scall on the graphic). A rod or bar terminated with a floater that floats on the liquid level can be fitted in the 45mm diameter shaft end that has a 6mm diameter hole.

Many other application, where a liquid level needs to be known with accuracy and when the sensor must be immerged are possible. This in any liquid corrosive or not. The only restriction is that the liquid must not disolve nylon, epoxy, PMM nor PVC. In such case the encoder and bearing can be enclosed and made with special resistant material (this on explicit request).

In any case, the shaft rotation speed will be low in air and a bit faster in liquid with the actual bearing but the magnet can also be delivered with the interface but without the bearing construction for specific application. There will then be only the data transmition speed as limit.

Anyway, the interface is able to determinate the angular position of the magnet that can be fitted on any moving part. The magnet center just needs to be at 19,5mm of the interface edge enclosure. The magnet is a cylinder of 12mm diameter and 12mm long and has a hole in its center for an easy montage. 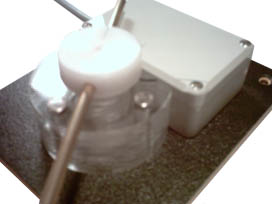 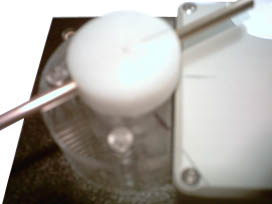